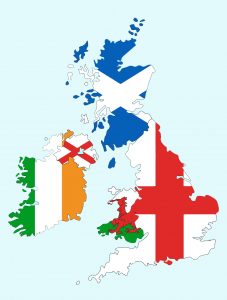 On June 23, 2016, the United Kingdom (UK) decided to leave the European Union. After several extensions, on January 31, 2020 at 11:00 pm, BREXIT is official, which leaves UK in a transition period until December 31, 2020. This decision had a big effect on the international trade and more specific to Ireland and Northern Ireland.

However, a new “regulatory ” border between Northern Ireland and Great Britain (England, Wales, and Scotland) will be needed since Great Britain will not follow anymore the EU rules in the future.

The big question is –

What will happen after January 01, 2021 and how will Ireland be affected?

Even though there is a physical border between Northern Ireland (UK) and Ireland (EU), without any bilateral trade deal, UK and EU will trade on World Trade Organization (WTO) terms in 2021. How is this impacting the goods movement between the two Irish parts?

From 1st of January 2021, WTO rules will apply to all members. This is known as MFN – Most Favored Nation Treatment, which means that UK and Northern Ireland cannot offer better trading terms to one country and not to another, unless through an FTA – free trade agreement.

What are the major changes in this case from a trade perspective?

How can Krypt and SAP GTS help Ireland to manage BREXIT?

Companies into the global trade landscape ought to effectively & strategically manage various global trade decisions and obligations. The same holds true to mitigate the regulations of Irish Customs.

Krypt is an SAP preferred integration & implementation partner and has assisted in the success of global businesses through implementation of SAP GTS, TM, IBP & EWM

With no Free Trade Agreement in place, BREXIT will continue to bring new challenges and changes in the international trade area and more specific, to Ireland. There will be an increase in the customs filling, import/exports costs, brokerage costs due to BREXIT.

We can help you gain insight into how you can integrate all the legal changes in your business using SAP GTS and be post-Brexit compliant.

If you are worried about an increase in customs filing due to BREXIT or if you need to manage customs in Ireland, we have you covered. Our unique customs self-filing solution in Ireland works with SAP GTS or any other ERP system.

We can offer full post-BREXIT support for Ireland, adapt SAP GTS to your business needs and help you leverage your work during the creation of the future agreements.

Reach out to us for a DEMO and CONTACT US for more details.

If you wish to gain a brief insight into the far-reaching measures & changes slated for December 31, 2020 BREXIT deadline, you can read our previous blog titled – “Brexit: Customs & Regulatory fixit following UK’s exit.”