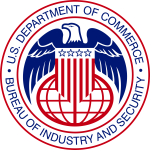 Export Administration Regulations (EAR) are in place to control exports (including re-exports and deemed exports) of commercial and dual-use goods, software and technology (i.e. items not intended for military use but may be used for military purposes). These regulations are managed by the Commerce Department’s Bureau of Industry and Security (BIS). When determining whether an export license is needed from the Department of Commerce, look to the Export Control Classification Number (ECCN) of the item you intend to export. All ECCNs are listed in the Commerce Control List (CCL).

Items subject to EAR restrictions fall under one of the ten categories listed on the Commerce Control List (CCL):

Exports of items identified on the CCL may require a specific license from the Commerce Department, depending on the reasons for control applicable to the particular items, the country of destination and the purposes for which the items will be used.

Items not explicitly identified on the CCL fall into the “EAR 99”. This includes a wide range of common goods such as pencils, automobiles and household appliances. Generally, EAR 99 items can be exported without a prior license from the Commerce Department, except to sanctioned countries/entities/individuals.

One of the more recent additions to the CCL is the 600 series. This series was created in an attempt to lift some of the restrictions on exporting U.S. products.

600 series – Export Control Classification Numbers (ECCNs) in the “xY6zz” format on the Commerce Control List (CCL) that control items on the CCL that were previously controlled on the U.S. Munitions List or that are covered by the Wassenaar Arrangement Munitions List (WAML).

The “6” indicates the entry is a munitions entry on the CCL. The “x” represents the CCL category and “Y” the CCL product group. The “600 series” constitutes the munitions ECCNs within the larger CCL.

Example and breakdown of a 600 series ECCN

9×515 – (the “x” representing any of the product groups A- E) describe “spacecraft,” related items, and some radiation-hardened microelectronic circuits which were previously subject to the International Traffic in Arms Regulations (ITAR) and United States Munitions List Category XV. The same way ITAR trumps the Export Administration Regulations, items described in a 9×515 ECCN or 600 series ECCN trump other ECCNs on the CCL. 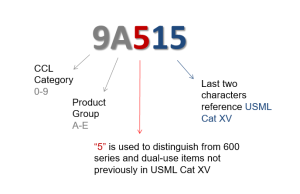 Example and breakdown of a 9×515 ECCN

One provision of the EAR that may be overlooked are Antiboycott laws.

The antiboycott regulations were adopted to encourage, and in some cases, require U.S. firms to refuse to participate in other nation’s economic boycotts or embargoes.

For example, say your organization manufactures goods in the U.S. and has business in the Middle East. If you are asked to certify that your goods are not manufactured in Israel, you may think you are in the clear. However, providing that certification would violate U.S. law. Even if you don’t make that certification, you would need to report this request to U.S. regulators under the U.S. antiboycott laws.

In said situation, you’d be at risk. The U.S. antiboycott laws forbid U.S. companies from cooperating with the Arab League boycott against Israel and other foreign boycotts that the U.S. does not support.

The EAR is very extensive and always changing. This article is a synopsis of a few aspects of EAR which we chose to highlight. For more detailed and always up-to-date information on U.S. Exporting laws, we recommend visiting https://www.bis.doc.gov/