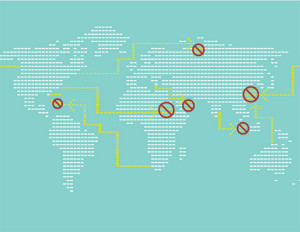 As supply chains have become global, it is very common for companies to either procure or ship goods to and from a transit country.

What is a transit country

Transit countries are countries in which goods are transported from the originating country to a final destination through a third country. For example, if goods were to ship from United States to Switzerland through Netherlands, Netherlands would be considered a transit country.

Sometimes businesses want a transit country to undergo ‘Embargo’ and ‘Legal Control’ checks. This is possible by enhancing additional checks for transit countries.

One of the fundamental checks that has to take place is with the route. The route is the way in which the item is to be delivered, either by multiple legs or connection between point of departure and point of destination. The route in the sales order or delivery line item should consist of at least two route stages. Routes can either be predetermined by the system or specified in the sales order or delivery line item directly. The transportation connection point that joins the two stages must have a country indicator in its address data that differs from the ones in the address data of the departure point and the destination point. Sales Order and Delivery can be transferred from the SAP ERP feeder system to SAP Global Trade Services (GTS) and one of the standard plug-ins is enhanced to activate the route-dependent export control for transit countries. 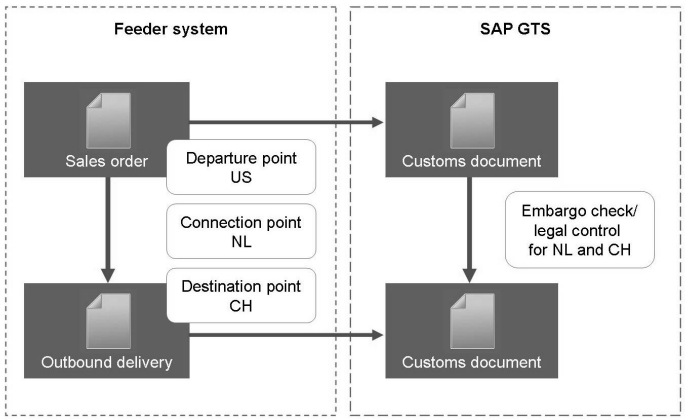 Shipment from US to Switzerland through Netherlands

In the above example, the route in the sales order or delivery line item should consists of a stage from New York Harbor (U.S.) to Rotterdam Harbor (Netherlands) and a subsequent stage from Rotterdam Harbor to Bern (Switzerland). Assuming embargo checks have been activated in SAP Global Trade Services, the system checks whether the United States has imposed an embargo on both Netherlands and Switzerland. If the legal control checks are also activated, then the system performs the following checks:

Trade requirements can get complicated, thus a major benefit of using a sophisticated global trade management system like SAP Global Trade Services (GTS), when implemented properly, is that it can ensure a smooth supply chain flow in a compliant manner.