The cause for a pause of EU’s legal action

The delay in legal action comes after the bloc planned to file a so-called reasoned opinion.

To provide negotiation some room to resolve the issues raised by the protocol, the EU has paused on moving toward infringement procedures. Officials from both sides will talk through the summer to find technical solutions. Experts feel that it is unlikely that all the issues could be resolved and reaffirm that the deal agreed by Boris Johnson’s government cannot be renegotiated.

To get a clear picture, let us understand more about the NI Protocol and its agreement between the EU & UK.

It meant to keep the land border open and avoid implementing new infrastructure viz., cameras & border posts. Had both Ireland and Northern Ireland been part of the EU, this would be easy to do as they automatically shared the same EU rules on trade and needed no checks on goods traveling from one country to another.

Impact of Brexit & the Sausage Row

Under the protocol, all collectively agreed that Northern Ireland would continue to follow EU rules on product standards (part of the single market) to prevent checks along the border. However, checks would take place on goods entering Northern Ireland from England, Scotland or Wales. This warrants inspection at Northern Ireland ports and filling in customs documents.

The sausage row – a reason for the disruption 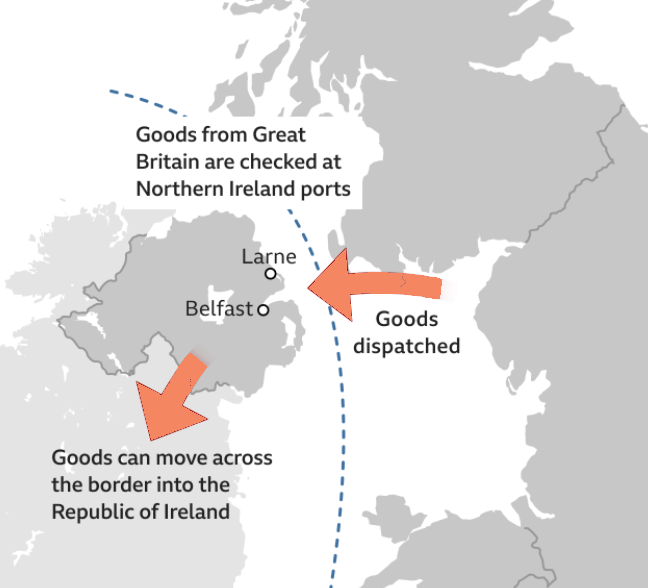 Under EU food safety rules, chilled meat products cannot enter the single market from non-member countries such as the UK, which means that sending sausages from Great Britain to Northern Ireland, in theory – is prohibited. As such, a new border was effectively created in the Irish Sea.

The UK considers this a “significant disruption” to trade between Northern Ireland and the UK. The dispute escalated when David Frost, the British Minister for EU affairs, demanded the bloc to renegotiate the protocol.

In response, the EU’s executive arm, through a published document, highlighted various areas where the bloc has shown flexibility, from changing its rules on medicines to the free movement of guide dogs, criticizing the British government of –

The makeshift facilities in Northern Ireland do not work to their total capacity due to acute human resource issues.

The Commission opines that it is a shared responsibility if the Protocol needs to achieve its goals. And they seek full and effective implementation.

The Commission suggests that the UK agree to continue following the EU’s sanitary & phytosanitary rules, albeit temporarily to help remove the need for most checks. But the UK considers this issue a matter of sovereignty and has insisted on equivalent arrangements instead.

In this deadlock, the EU won’t renegotiate the protocol but will continue to discuss its implementation.

Krypt is an SAP preferred integration & implementation partner and has assisted in the success of global businesses through the implementation of SAP GTS, TM, IBP & EWM

We can help you gain insight into how you can integrate all the legal changes in your business using SAP GTS and be compliant.

Our unique customs self-filing solution in Ireland works with SAP GTS or any other ERP system, helping you leverage it during the creation of future agreements.

If you wish to gain a brief insight into the far-reaching measures & changes of Brexit on Ireland, you can read our previous blog titled – “Ireland Global Trade Solution Post-BREXIT .”

Reach out to us for a demo or contact us for more details.