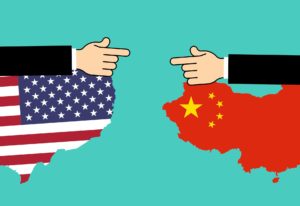 The geopolitical standoff between the USA and China has been the highlight of the last couple of years. The US, in the name of “fair trade practices” & “unfair transfers of American technology & intellectual property to China”, in addition to an effort to protect jobs in the US, implemented many sanctions and tariffs on products that originate from China. The US even got the Huawei CFO arrested.

Detail about this can be revisited in Krypt’s blog titled – THE GLOBAL IMPACT OF THE US – CHINA TRADE WAR.

Since then, the US export control regime has revised in a move to provide new mechanisms for US regulators to restrict exports, including exports to China, of items that are deemed to have national security significance. Notably, the new Export Control Reform Act 2018 directed the US Department of Commerce to formulate new controls for “emerging” and “foundational” technologies, which would enforce an increased licensing requirement for exports of such items to China.

In response to the US measures, and in the name of protecting its national security and interests, China has put forward a draft ECL for the first time since 2017 when an earlier draft was issued by the Ministry of Commerce (MOFCOM).  The latest Draft ECL, having 48 articles across 6 chapters is substantially shorter and more focused than the 2017 MOFCOM version that consisted a total of 70 articles.

While in May 2019, the US Department of Commerce’s Bureau of Industry and Security (BIS) placed Huawei and its affiliated entities on its Entity List, which restricts the export, re-export and transfer of US-regulated goods, software & technology to these entities. Supplementarily, in May 2019, a US Executive Order authorized a still-emerging government review procedure for assessing and potentially blocking commercial transactions involving information & communications technology or services that are deemed to cause an undue risk to the US infrastructure or economy or an unacceptable security risk. Krypt’s white paper titled – IMPACT OF BIS ADDITIONAL CONTROLS ON TRADE PROCEDURES & SAP GTS SYSTEM, explains more about it.

The beginning of the year 2020, brought the global trade & supply chain world to a complete halt due to spread of the COVID-19 pandemic. It has wreaked havoc across global economy, every human’s life and caused many deaths. The impact is the worst ever since the WW2 in 1940s.

To re-consolidate their export position, last year on December 28, 2019, the Standing Committee of China’s National People’s Congress published a Draft Export Control Law (Draft ECL), with comments added on January 26, 2020.  As per the Draft ECL, if enacted in its current form, it will be China’s first omnibus national legislation regulating export controls. This has been drafted at least in part to give China a statutory authority to counter USA export control measures targeting China.

In the aftermath of the pandemic and its immense impact on the global trade & supply chain, the ECL along with the USA export control regime, will have profound effect on international trade involving China by domestic (including foreign-invested) and overseas companies.

The most important features of the Draft ECL are as follows:

China’s current export control legal regime is not set out in unified national legislation, but rather is spread across the following several different laws & regulations:

Consistent with China’s commitments under the Nuclear Non-Proliferation Treaty, Chemical Weapons Convention & Biological Weapons Convention to which China is a member, the Article 1 of the draft ECL will bring in the performance of international non-proliferation obligations as part of the ECL’s purpose. China is currently a member of only one plurilateral export control regime, viz., the Nuclear Suppliers Group.  China still has not joined any of the other international export control regimes. Hence, it is unclear whether China is prepared to comply with other international control regimes, but the Draft ECL indicates a greater willingness to do so.

Items (goods, technologies, and services) characterized as any of the following will be designated on export control lists (regular or temporary) and subject to export licensing requirements. This mandates the exporters to apply for licenses to export the items described on the control lists, from China.

Under current law and subject to revision from time-to-time, relevant agencies in China publish control lists for categories (a) to (c).

National Technology Security Management List System under consideration by the National Development and Reform Commission based on the National Security Law (2015), timetable not known.

The Draft ECL will delete the retaliation provision of prohibiting exports of controlled items to countries, such as the US, that have imposed restrictions or prohibitions on exports of such items to China.

What constitutes a “RE-EXPORT”?

RE-EXPORT will no longer be a defined term and appears only in the supplementary provisions of the Draft ECL, but nonetheless it will remain subject to the ECL. This treatment will be similar to the US regime and would likely expand China’s extraterritorial reach and subject an overseas company to China’s export control licensing requirement when it re-exports Chinese-origin controlled items or any foreign-made item that contains Chinese-origin item to a country or region outside China.  It is worth to note that the 2017 MOFCOM draft imposed a “percentage” test (with detailed percentage thresholds to be specified in separate implementing rules) for determining whether a foreign-made product containing China-origin content attracts the Chinese ECL. This percentage test qualification would have been like the “De Minimis Rule” under the US Export Administration Regulations. However, the percentage test was cancelled from the current Draft ECL.

Exporters and importers would need to inform the relevant Chinese authorities of any change of end-user or end-use, i.e., any transfer of exported Chinese-origin controlled items by the overseas importer will also be subject to Chinese export controls, and a violation of end-user or end-use commitment could lead to blacklisting.

The transit, transshipment and through transportation of controlled items or the export thereof from a bonded zone, export processing zone or other special customs zone to an overseas country or region would be subject to the ECL.

What does this mean for GLOBAL BUSINESSES?

All the Multinational Companies (MNCs) outside & inside China will have to be aware of the changes in major export control regimes. When exporting to China, oversea MNCs will need to comply with the US or EU, export control requirements. And, when exporting from China, the MNCs within China will need to comply with the Chinese ECL.

Some MNCs doing business in China that face tightened technology transfer restrictions from the US are considering “In China, For China” strategies by developing indigenous technologies and intellectual property rights (IPR) within China’s borders to provide increased supply chain security to their Chinese customers.  With the impending decree of the ECL, such locally-developed IPR may be subject to export controls from China. This will have significant impact on MNCs favoring “In China, For China” strategies.  Under any circumstances, MNCs that engage in exports will need to establish internal export controls compliance mechanisms to satisfy multiple export control regimes, including China’s.

Implication of the RE-EXPORT & CONCLUSION

From the Draft ECL, it appears that China intends to strengthen its export control regime in part to provide counterweights to US export controls perceived as targeting China and Chinese companies such as Huawei.  After the ECL is promulgated, we expect to see new and consolidated export control lists.  Such lists will likely include sensitive and cutting-edge indigenous technologies, that will result in a tit-for-tat regulatory response to similar technology export control measures adopted by the US.

These control lists may also contain strategic resources such as rare earth metals, of which China has been the largest exporter to many countries – a potentially powerful tool for China to disrupt global supply chains. It can thus seen the Draft ECL reflects a continued movement toward selective “counter measures” between the two countries in certain sensitive industry sectors.

On the hindsight, for China the year 2020 has been like the Yin & Yan. If the Pandemic has been the Yin, this draft Export Control Law of China is the Yan. It is bound to help China recover all the lost grounds and counter the US re-export laws & regulations.

How can Krypt help businesses?

As a preferred SAP Partner, Krypt has partnered in the success of global businesses involved in cross-continental supply chains. By integration & implementation of SAP GTS, TM, IBP, and EWM such businesses can benefit from Krypt services for the following:

If you wish to know more about our products/services, please request a DEMO or do contact us.